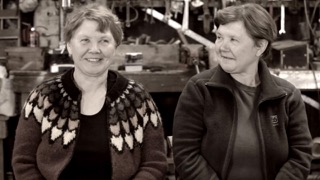 They live together, they’re in their fifties and they look alike. They are never sick, they hardly ever travel. They lead the most simple and yet beautiful life at their farm where the routine is the same, season after season, year after year. They’re hard working but yet their daily routine is oh so free from the stress of an average modern city person. They have lived together on the same farm since they were born. They are identical twins.

A heartfelt and touching story about two beautiful sisters, who’s life is utterly admirable, despite the fact that they have hardly ever left their homeground.

Exhibition / Triennial of Photography Hamburg / The Unicorn and Other Objects by Agnieszka Rayss
Movie / If Weather Permits by Huldar Breiðfjörð, Rafał Milach and Andrei Liankevich